The Lord Is Good

Did you know Hosea prophesied that in the last days, we would get a revelation of God’s goodness? “They shall fear the LORD and His goodness in the latter days” (Hos 3:5). We are seeing the fulfillment of that prophecy right now. 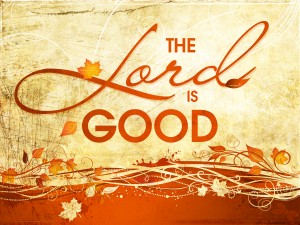 Several years ago, mainly through the ministry of Bill Johnson, a fresh revelation of Your kingdom come and Your will be done on earth as it is in heaven was released to the Body of Christ. It was wonderful and was accompanied by much fruit and in fact, much fruit remains to this day.

That initial wave has ebbed, but I am sensing another wave is coming our way. It may not look the same or sound the same, but it is going to be good. I am hoping this next wave will bring a greater fulfillment of Luke 6:16, “The law and the prophets were until John. Since that time the kingdom of God has been preached, and everyone is pressing into it.”

What did Jesus reveal that the law and the prophets could not reveal? He revealed the Father. The revelation of the kingdom of heaven answers the desire of all mankind to see the Father and to experience His goodness (John 14:7-9). The goodness of the Father is central to the gospel of the kingdom.

Jesus said that the gospel of God’s kingdom is being preached and everyone is forcing his way into it. Really? Where? When? Maybe in some far away place, but not around here yet, but it is coming I have seen it.

In the vision we had come into a deeper understanding of the Father and His goodness. That is what’s been going on with us over the last few years, going deeper. It didn’t seem like it because there has been a war over the goodness of God.

The enemy is deathly afraid of the declaration of the gospel of the kingdom so he has fought us tooth and nail. We have experienced casualties and loss, but we are still here. Refined and tried we paid a high cost, but in the end it will be worth it because it will result in praise, glory and honor to Jesus Christ (1 Pet. 1:7). And we will experience and shine forth with His glory (1 Pet. 5:10).

It is time to go on now and see His kingdom come and His will be done on earth as it is in heaven like never before. With this deeper understanding of the Father’s goodness we will find it easier to trust Him and that trust will enable us to further open our hearts to His healing, delivering and transforming power. And we will know that all He has is ours (Luke 15:31).

In this next wave I believe God may begin revealing to the world that it is the “Father’s good pleasure to give them the kingdom” (Luke 12:32) and that “no good thing will He withhold from them” (Psalms 84:11). I believe many will realize that God is for them and not against them for the first time in their lives. The Son of Righteousness is going to dawn upon the hearts of men and they will see that God is not holding back any good thing from them.